What if you subconsciously believed you could not become an artist?

Have you ever noticed how easy it is to believe things that aren’t true?

Especially the stories we tell ourselves.

By stories I mean the beliefs we have about ourselves.

Because the stories we tell ourselves can either help us or blind us to what we are capable of accomplishing...

Like whether we can or cannot become an artist, for instance.

Seeing Only What You Expect To See

I have encountered the power of these stories in my own life.

One small example occurred many years ago as I tried to remove a lawn mower blade.

It didn’t matter how much brute force I applied to the bolt that held the blade. Nor how loudly I swore at it. That bolt would not budge.

Okay, I thought, maybe I’m turning the bolt the wrong direction. Time to pull out the manual.

As I expected, the manual said you loosen the bolt by turning it counterclockwise. Like I was doing.

I went back to swearing and straining, but I could not loosen the bolt.

Finally, wondering if I had somehow misread the manual, I opened it again. To my surprise the words on the page had changed.

They now said you loosen the bolt by turning it clockwise.

We Create Reality From The Stories We Believe

My apparent blindness to reality in my lawnmower story parallels another story.

This story involves a gentleman who answered an online survey of mine.

I will let you decide if this is a Can or Can Not become an artist story.

The thing that frustrated him most, he said, was he didn’t feel he was creative.

He felt that way because he couldn’t draw or paint completely from his imagination.

He said he could draw things he saw or remembered, but he didn’t feel that was creative. 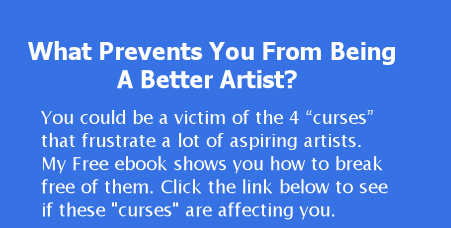 Now, if I believed his very restrictive definition of creativity, would I believe I could or I could not become an artist?

Frankly, if this were my story I would have to believe I’ve been a total creative failure for the last 40 years.

Instead, the story this gentleman is telling himself reminds me of the famous quote:

“It ain’t what you don’t know that gets you into trouble. It’s what you know for sure that just ain’t so.”

And that gentleman’s story is much like the myth Pat was telling herself.

Pat was a student I met years ago at the art school I attended in Minneapolis.

One day as we casually talked, she mentioned that she could not float in water. I thought to myself, how can someone not know how to float?

You just lie there quietly on top of the water.

So, I suggested we meet at Lake Harriet and I would show her how to float.

At the lake I had her relax and lie back on top of the water with my hand under her back supporting her.

As she gradually relaxed, I explained that I was going to gradually provide less and less support. We reached the point many times where she was floating on her own with only one of my fingers barely touching her back.

Despite all evidence to the contrary I simply could not change the story she believed about herself.

P.S. One of the biggest lessons I’ve learned over the years about whether someone can or can not become an artist is this.

Becoming an artist involves more than just knowing about pencils and paintbrushes.

What matters most is the type of subconscious story being played out in your head.

And, whether it’s true or false, how deeply you believe you Can or Cannot become an artist.