This Could Make Exciting Art.

But, it wouldn't make exciting art if all you did was just copy this scene as it looks in the photograph.

Why would I say that?

I mean, just look at the wonderful light. 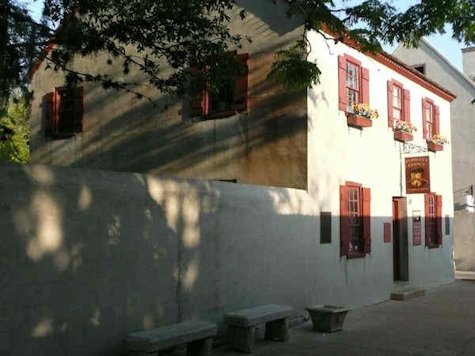 Look at the interesting tree shadows on the side of the building and part of the wall.

Look at the way a building shadow covers the lower part of the front.

Look at those quaint old windows with their shutters and flower boxes.

Yes, yes, I grant you there some things to like about this scene.It's just that all those things as they are right now aren't enough to make exciting art.

And if all you do is copy them as is, you may as well change your name to Xerox.

If you aspire to become an artist, then you need to begin to develop your creativity. You need to look for ways to change what you see to make your art more interesting, more exciting than the photograph.

And here's why. The problem is there are problems in this scene.

For instance, what is the star of this picture?

You might say the front of building is the star. And it tries to be. But, the lower part of the building is in shadow, so your eyes are naturally drawn to the three upper windows in the light.

But, those three windows aren't quite attractive enough to hold your interest.

Your eyes are also drawn to the dark windows and elongated shadows on the side of the building. The shadows are nice, but the windows are dark and mostly featureless.

The side of the building is not quite interesting enough either. It wants to be but doesn't quite succeed.

In fact, if you don't see problems to overcome in the photographs you use, you are probably not looking at them critically enough. Which means you will probably be content to just copy them.

Which means you aren't trying to make exciting art.

So, what should you do with this photograph to make exciting art from it?

If you were most inspired by the shadow shapes, you might begin to imagine ways to focus your design on them.

Instead of having the shadow of a building fall across the bottom of this store, you might do sketches that instead show tree shadows falling across the front.

If you found the light on the building front most inspiring, you might do what I've done in my sketch below.

You can see I have kept the shadows on the side of the building, but I've included a tree to block out one window there and hopefully add a little more interest to the left side of the painting. 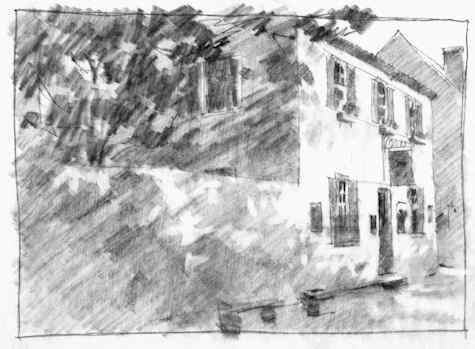 To make the front of the house the star of my art, I've eliminated much of the shadow on its lower part. That makes the door and all the windows stand out more.

I've also created more light areas on the ground in front of the building to help lead your eyes to the doorway.

I could take this idea even further by seeing if placing a person (or two) in the street makes it better.

The point is you don't create exciting art unless you are willing to search for your best idea. And your best idea is almost never just copying the photograph.

P.S. Once you have found your best idea, the one that gets your adrenaline pumping, then you need to draw it.

Depending on your experience level, drawing this building in perspective may seem a bit tricky.

It takes careful observation to get the many different angles of the roof, the windows, the wall and the street drawn correctly.

This is just as important as designing your idea. The best idea in the world will falter if it is badly drawn.

Preventing that is the subject of the next blog post.