You Must Swear To Never Paint The Truth

Do you believe you should always paint the truth?

Think about this for a moment. Have you ever seen a movie or TV show where a trial was taking place?

Often a witness called to the stand to testify will be asked to swear they will "tell the truth, the whole truth and nothing but the truth."

Art is quite different than a court of law.

In art the result when you paint the truth, the whole truth and nothing but the truth, is you may be creating a really boring piece of art. 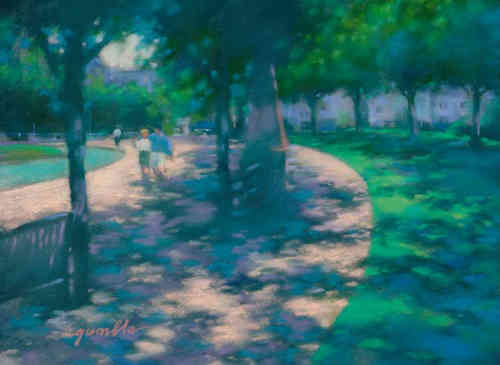 Art is one of the few places where you are actually encouraged to alter the truth. Like I did in this painting.

Do you think I really saw those colors in the shadows?

Learning to see what could be there, rather than what is, I believe to be one of the great landscape painting tips.

If you are a purist, you might consider what I did lying.

Well, in art lying is defined a little differently. It is called IMAGINATION, and in art, imagination is a highly prized commodity.

It is one great artist resource.

We see reality every day of our lives. Art should provide us with an escape into something more pleasing or more exciting.

That's why I love and use this quote from George Bernard Shaw in my signature: "Without art the crudeness of reality would make the world unbearable."

Much too often beginning artists think just copying what they see will result in good art. As the old song from Porgy and Bess says, "That ain't necessarily so."

Look at the painting below by C. Michael Dudash. 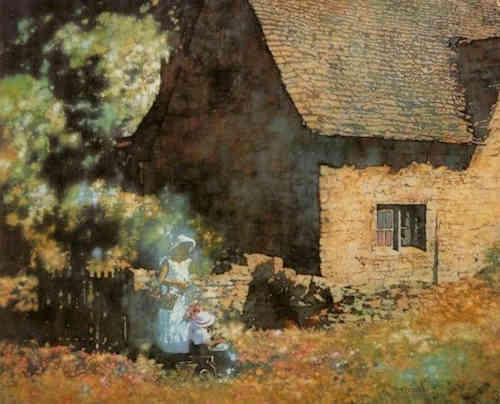 Don't for a moment believe that Michael wanted to paint the truth about this scene. I think he lied (used his imagination) throughout.

I seriously doubt it.

Did the light on the trees and bushes and the very air around the woman magically glow as he shows?

Again, I don't think so. But it does create one of his great painting ideas art.

To do that he used his imagination and his skill as a painter to create a scene that speaks of warm summer light and love.

He painted it in a way that draws you into the scene.

In other words he created ART; he didn't just paint the truth.

In future posts I'll show you how more artists greatly improve on what they see.

P.S. Why are you drawn to art?

What is it that attracts you to this endeavor, rather than something easier like stamp collecting?

Are you content to try to reproduce only what you see or do you have the courage to use your imagination?

It does take a certain amount of courage to imagine something different from reality. At first, it may seem like stepping off a ledge – a frightening leap of faith that you won't fail.

But how else can you really use and develop the talent you have? Nothing grows when it stays the same.

The greatest risk is not in taking that leap of faith and believing you can develop your imagination.

The greatest risk is in staying the same, never having the courage to go beyond where you are right now.

Which risk frightens you more?